About Our Parochial Vicar 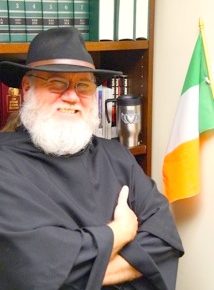 Father Timothy Harris, T.O.R., as a member of the Most Sacred Heart of Jesus Province of the Franciscans Third Order Regular has fulfilled many ministries for our Church. Most recently, he was the Director of Campus Ministry for the Austrian Study Abroad Program for Franciscan University and an Assistant Professor of Theology.

Father Timothy was born in Buffalo New York, but has lived in Europe as well as throughout the east coast of the United States, including spending a decade in Florida. As a T.O.R. friar, he began teaching fourth grade math for a parochial school but would continue to teach at the University level for both St Francis University of Loretto PA and Franciscan University of Steubenville OH. For four years he was a parochial vicar at St Joseph Parish in Northern Virginia. He has also worked with young adults on college campuses in Pennsylvania, Ohio, Washington DC and Gaming Austria as a campus minister. These experiences have aided his retreat work for different groups ranging from high school students to men’s and women’s conferences. He has even been involved with prison ministry and police chaplaincies that have allowed him to tap into his previous education in criminology. His life experiences combined with his Franciscan, Incarnational spirituality gives him a uniquely earthy quality to his teaching and preaching style